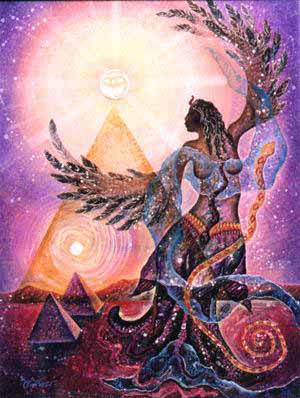 According to many occult history teachings, Atlantis was located in the middle of the Atlantic Ocean and its island chain spread as far as the Mediterranean Sea. It was a civilization that existed for over 2000,000 years, and the majority of this time it held a strong vibration of light and love. Its Golden Period was at the highest level of light consciousness ever achieved on the earth plane.

It was a time when humans were most connected to the Divine. Imagine a world with healing springs and crystal beds. There was a major underground highway that went from island to island, including parts of North America. Some cities were underwater surrounded by dolphin friends. There were electro-magnetic energies that spiraled upward from the earth’s core, and Atlantean Temples of Healing were placed in these regions. The Atlanteans understood the earth’s ley energy lines and how to tap into stellar and solar energy.

The Atlanteans were master crystal growers and found accelerated growth in areas like Bimini (Bahamas), Arkansas, Tibet and Brazil.

In fact, a pyramid cap has been found in the Bahamas, near the Bermuda Triangle. Could the intense energy in these waters be caused by a pyramid buried deep underneath the ocean floor? Throughout Atlantis, power crystal grids were triangulated and connected through a copper-gold rod that could receive stellar, solar and electro-magnetic earth waves. This system could power the entire civilization.

They created a crystal satellite moon that amplified all of the crystal energy throughout their civilization. If Atlantis was so advanced, then why did it fall? One story goes that two groups formed and the political government gained control over the more peaceful islands where healing occurred.

Wars began and the political “administration” decided to use the crystal moon to bring about destruction. This moon began to overload and crash. The healing council knew that their land would be destroyed if the political regime wouldn’t stop overloading the satellite. These wise ones planned ahead and buried some of the major crystals in important parts of the world. When the satellite moon finally overloaded, a lot of earthquakes, volcanoes and eventually the “Great Flood” occurred. Before it did, many of these wise Atlanteans departed by ship and possibly other vehicles and dispersed throughout the world in places like England where they created Stonehenge, South & Central America where several pyramids are still being found, and of course Egypt, the most famous pyramid civilization of them all.

These lands have myths of “other” beings or wise ones coming to aid their society. These beings looked decidedly different. Think of the Mayans who worshipped Star beings and Amnenhotep, who changed Egypt by worshipping only one God.

The Great Pyramid of Giza was believed to be built by the Pharoah Cheops and is one of the Seven Wonders of the World. Through past life regressions like those of Edgar Cayce, we’ve suspected it was more than just a burial chamber. It was originally built as a hall to initiate those dedicating themselves to the secrets of the mystery religion of Egypt and was meant for holy services. Supposedly, it was built by levitation via song and chanting, much in the same way Stonehenge was placed. Its capstone was alloy, copper, brass and gold. The Great Pyramid is a record in stone of man’s earliest beginnings to present day written in geometry, algebra and astronomy.

All pyramids are a storehouse of energy. Many frequencies in pyramids resonate together in the same way two piano keys are struck simultaneously.

Patrick Flanagan, an American scientist, claims that pyramid energy prolongs life. He believes that the Great Pyramid is a powerful source of bio-cosmic energy. This is life-force energy isolated. Think of the Biblical Ark of the Covenant and its immense power and you’ll understand pyramid energy.

The word pyramid literally means FIRE IN THE MIDDLE. This is the power of bio-cosmic energy combined with the ability to radiate energy off the top capstone.

Through further research by the Frenchman Monsieur Bovis showed that anything he placed in a pyramid became preserved as if dehydrated instead of rotting and decaying. Even an Italian milk company put their milk into pyramid shaped cartons. The milk keeps indefinitely. Another French company has patented a pyramid container for its yogurt.

People make pyramids today to sit for meditation and healing. Copper rods seem to work best. They are said to have the following benefits.

· Restore luster to jewelry and silver

· Dehydrate flowers without losing their color

· Promote healing of cuts and bruises

You may be unsure about whether or not to believe the stores about Atlantis, but you can clear up any mysteries about the benefits of this culture’s iconic power house by experimenting with the healing power of the pyramids and their sacred geometry yourself.

Rev. Maggie Batt is a Reiki Master of several lineages including Atlantean and Crystal Reiki. These Online Attunements are available in the Web Store. You must be a Reiki Level II student before taking these advanced Reiki courses. Learn the basics about crystals by purchasing the Elementary Crystal Healing E-book or attending workshops in St. Petersburg and Tampa, Florida. View the Calendar for more details.