The Wounded Healer
By Margaret Wilcox 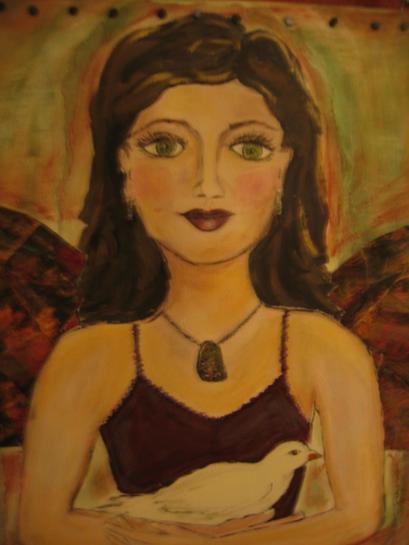 It was my first apartment in Los Angeles.  I grew up in the suburbs outside of the city center, but now I felt ripe with new possibilities.  I just ended a long, painful relationship, and a dear friend had passed to the other side.  It was then that I earnestly began practicing magic and tarot.  I “saw” my deceased friend as a spirit helper, created my first altar, and felt so true to myself.

“I’m going to eat at a new restaurant each week,” I told myself.  I never did.  Instead I got stuck on the west side of town in the beach city of Santa Monica.  I began to work, play and eventually live there.  I stumbled upon the British/Irish community and frequented pubs and taco stands.  I connected to my Gaelic roots.  Life was wild and exciting…a little too exciting.  My overly emotional Leo nature caused me to live life very intensely.  “Dance like no one is watching, and love like it’s never going to hurt,” I always say.  The problem was I was already a high-voltage indigo.  I needed grounding.

I suffered from daily migraines and fainting spells.  I had a very sensitive nervous system.  My third eye and crown chakra felt pickled.  Even wearing hats gave me a headache.  When I was told I needed to go on medication, I turned my attention to herbs, meditation and relaxation in lieu of pharmaceuticals.  I knew deep down that there was a deeper meaning to life.  So I began seeking.  I asked the Universe for assistance and it delivered a message.

One day I received a note in the mail about a healing weekend with a Reiki Master.  This class was held right across the street from my house.  I felt “chicken skin”—those tingles of recognition as I read the flyer.  It felt SO right.  I canceled yet another trip to Las Vegas with the girls and signed up.  I knew it was a sign.  Heal Thyself!

After the workshop, I felt as if I were floating—my being was so ascended.  I wore grounding crystals to get my feet back to Mother Earth.   I would walk by street lights and they’d flicker.  When I looked in the mirror I saw a change in my eyes.  They seemed almost alien to me.  If the eyes are the windows to your soul, had my soul become clearer?

When I spoke to friends about my healing weekend, my hands would begin to light up.  They became warm and buzzed with energy being projected outward.  The Universal Light was working through me and I began to honor my own divine nature.  My connection to my spirit guides, animal totems and the angelic realm helped me to increase my intuition.  My love for Divine Energy grew from an honoring to a knowing as I could now really “feel” the love and “see” with open eyes.  This allowed me to channel my power in positive ways.  I felt this immediate need to share this incredible, cosmic energy.

My health began to greatly improve.  My system didn’t feel so sensitive.  I had a newfound strength.  I walked daily and ate healthy foods.  Around this time I also began a Kundalini Yoga practice.  My chakras and energy pathways opened up, and I was able to purge current and past lifetimes of junk I had collected.  I learned to take care of my body and listen to its signals.  I began to be in the flow where your crown chakra connects to your higher-self, spirit guides and Divine Energy.

I continued to work on my health.  As I unpeeled layers of myself like an onion.  At times I felt like the wounded healer.  I had to truly experience disharmony in order to help others.  I felt what others were feeling so intensely.  I believe my calling then was to be empathetic—to feel what Gaia and her inhabitants were going through.  I eventually had to learn to filter the emotions and mind energy of others.

I gave energy treatments to clients as they lied on a massage table.  I would call on the Reiki and let the energy flow throughout the recipient’s body.  I tried to set my ego aside and let the energy go where it was needed.  After a session, I would often feel energy purging.  At times it was difficult to discern between what was mine and what was my client’s stuff.  I’d say out loud, “This is not mine. I don’t own this.”  Then a release of energy would pass through me like a wave, exciting out my legs into the Earth, the energy recycler.

When I channeled energy for others, that energy would also heal the parts of my body that I was working on.  I often had clients with needs in the same region of the body where my body also needed healing energy.  This sometimes caused me to deeply feel my own karma as I was forced to face it head on.  Tears and anxiety would well up and body aches increased as the energy came to the surface.   I likened it to stirring up the muddy river.  The muddy debris I had shoved down surfaced and said, “Look at me.  Pay attention to my needs.”

I had to work through my karmic baggage.  As part of my ritual, I would sit in my meditation chair (momma’s throne) with journal, pendulum and tarot cards.  I was now armed with my inquisitive tools.  I went into a meditative state and called on my spirit helpers, my guardians, my Divine Source, the elementals and my higher-self.  I then called on Horus, the Egyptian God of Knowledge.  Horus always helps me to “read” objectively and not believe whatever my shadow self wants to hear.  His high advantage in the sky allows me to see the higher side of a situation.

I threw a Chakra Spread—one card for each Chakra, starting at the Root Chakra.  This helped me see what my energy bodies were carrying.  When I thought I “knew” an answer to my suffering, I confirmed it with the pendulum.  Sometimes, I would grab a history book or other book of interest and ask deeper past life questions of the pendulum.  Once I named it, its healing began.  Even if I was not clear what I was sitting with, I would say, “Let healing of the past that is blocking me in the present begin now.”  I then channeled healing Reiki energy to clear it out quicker and fill me up with a positive light vibration.  That was it.  I let it go!  I tried to move on and be in the present.

The more I worked with the Reiki energy, the stronger it became.  My whole being would, resonate so strongly that the Reiki energy would fill up a room when I entered.  My chakras opened, my aura increased and I started channeling energy through my eyes and palms.  I could then perceive emotions, mental thoughts and sometimes the weight of the Karma of others in the room.  This wasn’t always a pleasant experience.  I had to learn to take in the energy–strengthen it and expand it—rather than letting it flow away from me and drain my energy reserves by giving away too much.

I learned, sometimes the hard way that I needed to protect my energy in public.  I got drained easily by energy vampires.  Most vampires didn’t even know that they were draining me.  Some had spent a lifetime doing it.  Maybe they suffered a childhood trauma and were unable to get their energy from usual sources.  I learned to shield properly so I could filter out the bad stuff and filter in the energy I needed to intuit others’ needs.  This allowed me to not completely block my heart.

In Sanskrit this is called Karuna.  Kuan Yin was the MahaKaruna or Great Compassionate One.  She embodied the quality of compassion to all women and children. Her feminine energies of nurturing and forgiveness are re-surfacing.  She taught me that what is most needed on our planet is compassionate action.  This is not just compassion, but putting that compassion into action.  Doing something for others also boosts my own energy.  After all, we are all connected.  When I help others, it lifts the burden off me where my energy may be stifled and unforgiving.

I’ve learned that first; I must be compassionate towards myself.  I cannot love others, unless I love myself fully.  By loving and knowing who I am, I can speak my truth with clarity.  If I fall into addictions and bad habits, it is a sign that I do not love myself enough.  As the wounded healer, I tend to heal those around me, before thinking of myself.  I try to find time to meditate and receive the energies of the universe.  I am a woman, receptive.  I visualize what I want, and sit back and wait for the results.  When I see myself being too external, like men going about things forcefully, I stop and go back to my meditative practice which is more feminine.  I allow others to compliment me, get things for me and pleasure me.  It is okay, I deserve it!

Lately, as my 44th birthday approaches, I feel like I am entering a new saga of healing.  Old wounds of youth are resurfacing.  Chaos can circle me like a storm.  When times get overwhelming, I stop and listen to the signs Kuan Yin is giving me.  “You are creating these changes yourself,” she says.  Sometimes I forget my powers of manifestation.  When my words and thoughts are carried on the giant web of consciousness, they get answered quickly.  As changes are brought about, I try to hold on to the present moment.  Being with my family brings me the most joy.  Though I still feel the wounds of myself and others, I take comfort in my connection to the Divine and send this energy to all that need it, including ME.  I still dance like no one is watching and love like it’s never going to hurt, but now with a twinkle of time in my eye.