WHEELS OF LIGHTHistory of Halloween

The History of Halloween 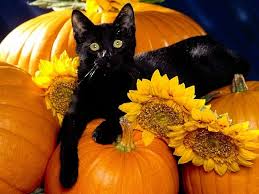 All Hallow’s Eve also called Samhain, All Soul’s Day, All Saints Day or Halloween is the most magical night of the year. It is considered the Celtic New Year. It is a night of glowing jack-o-lanterns, bobbing for apples, tricks or treats, and dressing in costume. For some, it is a night of ghost stories and seances, tarot card readings and scrying with mirrors.

Traditionally, it is a time of clairvoyance (seeing with your 2nd sight), when the veil that separates our world from the otherworld is at its thinnest. It is an excellent night to peek into the future. As in most ancient pagan holidays, the eve is more important than the day itself. Many ancient cultures celebrated this as a festival of the dead, including the pre-Spanish Mexicans and the Egyptians. Most of our modern American traditions can be traced to the British Isles. This holiday marks summers end.

The scary face of the jack-o-lantern was useful for those who traveled the road in order to scare away spirits or faeries that might lead you astray. Set on porches and in windows, they cast the same spell of protection over the household.

The custom of dressing in costume and trick-or-treating is of Celtic origin. Wearing costumes arose so mortals could impersonate the animal spirits. The custom was not for only children, but was actively indulged in by adults as well. Caroling once practiced at all major holidays was also done from house to house.

It is a time to have a feast for those loved ones that are dead. It was believed the dead could, if they wished, return to the land of the living for this one night, to celebrate with their family, tribe or clan. Honor your deceased ancestors by creating an altar or set your dining table with photos and memorabilia of them. Plan a family dinner with a place setting for your deceased ancestors.

This Halloween create a new ritual in your home instead of the usual candy feast, and please dress up!

For more ways to connect to the other side, read my Spirit Helpers Ebook.