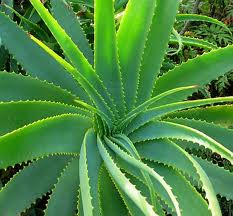 Aloe Vera the calming gelatinous plant is so threatening on the outside with her spiny-toothed leaves, though inside she’s so soothing and cool. Her leaves form a rosette and despite her spiky overcoat, she is quite long-legged and majestic. She reminds me of the Hindu Goddess Kali-Ma with her many arms—she has a rough exterior and can weed out troubles of your world in a fatal sweep, and yet her interior reveals a loving heart, being a patron Mother Goddess to women. She calls us to claim our inner power.

I typically used her for that occasional kitchen burn like most of you. As a kid, I quickly learned she could be used for bacterial infections like staph. She healed me when antibiotics failed and always surpassed any anti-bacterial ointments.

One day Mother Aloe Vera saved me. It was a sticky Tampa afternoon, and I stumbled upon a shack in the historic Cuban district of Ybor City. I had just taught yoga and was feeling positive about my healthy path and was searching further down my road. I was about to be taught more.

Cephas was his name and aloe smoothies were his game. At sixty-five, he was as fit as any twenty-year-old I’ve seen in our tropical city. He was from Jamaica and he spo’-ka like dis. His Calypso-typed cadence had me very enthralled in his words, and boy, did that man speak.

He never held back from telling me things like, “You’re fat because your small inTEStines aren’da working.”

He also mentioned, “Put da aloe on dose wrinkles and dey’ll go away.”

A woman of 42 has to be brave and bold to hear those truths without self-judgment. I noticed his giant aloe plant placed perfectly in front of his building. I wondered if he knew the power of protection she possessed.

Then he proceeded to talk to me about my inner mucus with much detail and vigor. It was an icky conversation that led me to ask about my glands. I had been diagnosed prior with adrenal fatigue which was affecting my ovaries and thyroid. I was a sweet, hot mess, but I had learned to accept my transitioning inner goddess and let myself gently unfold.

He then says, “Use da birth control sister. Many women in deir 40’s and 50’s, dey come and tell me deir pregnant.”

“Okay, okay, I’m sold. Hook me up with an Aloe Vera smoothie.”

He proceeds to make a giant Aloe Vera smoothie out of the elephant eared aloe plant. He pours me a cup.

Done! Now he pours more from the pitcher. In the meantime, I’m about to hurl and the earth is spinning.

“No you must,” he says as if my life depended on it.

So I somehow get another cup down and let him pour one more to finish my order. I start to sneak off to my car with the full cup in my hand.

“You better drink dat,” he bellows. “It’s okay if you throw up in the bushes.”

It’s been about a year since that day I met Mother Aloe Vera in a whole new light. Ruled by Venus, she taught me to love myself.

As part of my weekly ritual I make my own aloe smoothies now. It is interesting how like heals like. As I carefully slice open the giant, sharp leaf this oozing snot begins to seep out. It heals the soggy part of me—that I’ve neglected too long.

I light a seagreen candle to connect to Mother Aloe Vera’s serener side. As I drink Her down, I imagine all the mucky energy inside me is washing away. Any harm I’ve done to my body, any energy attachments, any residue I’ve picked up from others is now being pushed down, down, down, moving the darker energies that don’t serve me. They can’t pass the gelatinous fudge that continues to move, further into my small intestine that is now a winding journey. She spends some deliberate time here cleansing, healing, and repairing the damage of the past. Mother Aloe Vera finally leaves my system the good old-fashioned way, and I am blessed with renewal.

I then take the wide ends of the leaf that I have cut off to get to her heart. I slice these and proceed to bless my entire body with her calming essence as I rub her insides all over my skin. I pay special attention to those areas that look more weathered from aging, pregnancies and environmental stressors. Okay, yeah, I mean wrinkles, sags, bags, scars and stretch marks.

I have loved the effects of Mother Aloe Vera so much that I’m trying to find ways to make a face gel out of Her. I find the elephant-eared aloe easily in my grocery store in Florida. Check out your market and look for a large 1-2 foot leaf. When buying a whole plant, make sure it is a large stemless Elephant Ear Aloe. Many aloes you shouldn’t ingest. The bottled aloe is helpful, but not full of the wonderful digestive enzymes of the live leaf. I hope to start an Aloe revolution. Please join me!
Watch this video to learn about Aloe’s benefits from Cephas himself.  Notice how he cuts the aloe to make the shakes.  Simply cut off the ends then create a slit up the side to open the large leaf like a book.  Then you scoop out the slimy insides into your blender.  Add purified water and ice and that’s it!